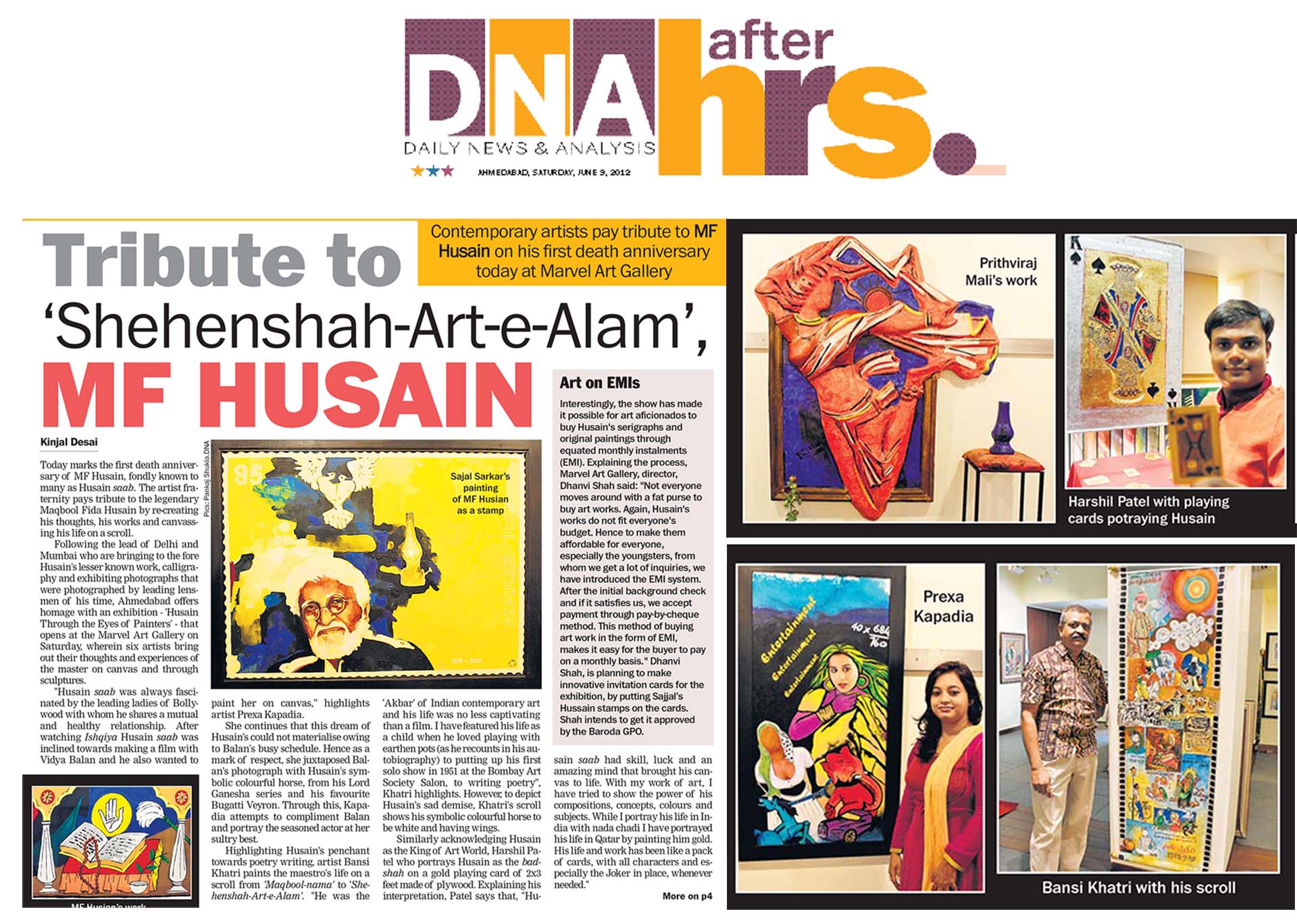 Today marks the first death anniversary of MF Husain, fondly known to
many as Husain saab. The artist fraternity pays tribute to the legendary
Maqbool Fida Husain by re-creating his thoughts, his works and canvassing
his life on a scroll.

Following the lead of Delhi and Mumbai who are bringing to the fore
Husain’s lesser known work, calligraphy and exhibiting photographs that
were photographed by leading lensmen of his time, Ahmedabad offers
homage with an exhibition – ‘Husain Through the Eyes of Painters’ – that
opens at the Marvel Art Gallery on Saturday, wherein six artists bring
out their thoughts and experiences of the master on canvas and through
sculptures.

“Husain saab was always fascinated by the leading ladies of Bollywood
with whom he shares a mutual and healthy relationship. After watching Ishqiya
Husain saab was inclined towards making a film with Vidya Balan and he also
wanted to paint her on canvas,” highlights artist Prexa Kapadia.

She continues that this dream of Husain’s could not materialise owing
to Balan’s busy schedule. Hence as a mark of respect, she juxtaposed Balan’s
photograph with Husain’s symbolic colourful horse, from his Lord Ganesha
series and his favourite Bugatti Veyron. Through this, Kapadia attempts to
compliment Balan and portray the seasoned actor at her sultry best.

Highlighting Husain’s penchant towards poetry writing, artist Bansi
Khatri paints the maestro’s life on a scroll from ‘Maqbool-nama’ to ‘Shehenshah-
Art-e-Alam’. “He was the ‘Akbar’ of Indian contemporary art and his life was no less
captivating than a film. I have featured his life as a child when he loved playing with
earthen pots (as he recounts in his autobiography) to putting up his first solo show in
1951 at the Bombay Art Society Salon, to writing poetry”, Khatri highlights. However,
to depict Husain’s sad demise, Khatri’s scroll shows his symbolic colourful horse to
be white and having wings.

Similarly acknowledging Husain as the King of Art World, Harshil Patel who portrays
Husain as the badshah on a gold playing card of 2×3 feet made of plywood. Explaining his
interpretation, Patel says that, “Husain saab had skill, luck and an amazing mind that
brought his canvas to life. With my work of art, I have tried to show the power of his
compositions, concepts, colours and subjects. While I portray his life in India with nada
chadi I have portrayed his life in Qatar by painting him gold. His life and work has been
like a pack of cards, with all characters and especially the Joker in place, whenever
needed.”

Art on EMIs
Interestingly, the show has made it possible for art aficionados to
buy Husain’s serigraphs and original paintings through
equated monthly instalments (EMI). Explaining the process,
Marvel Art Gallery, director, Dhanvi Shah said: “Not everyone
moves around with a fat purse to buy art works. Again, Husain’s
works do not fit everyone’s budget. Hence to make them
affordable for everyone, especially the youngsters, from
whom we get a lot of inquiries, we have introduced the EMI system.
After the initial background check and if it satisfies us, we accept
payment through pay-by-cheque method. This method of buying
art work in the form of EMI, makes it easy for the buyer to pay
on a monthly basis.” Dhanvi Shah, is planning to make
innovative invitation cards for the exhibition, by putting Sajjal’s
Hussain stamps on the cards. Shah intends to get it approved
by the Baroda GPO.