0
Husain paintings now on EMI, but for youngsters only
25 February 2013
Next 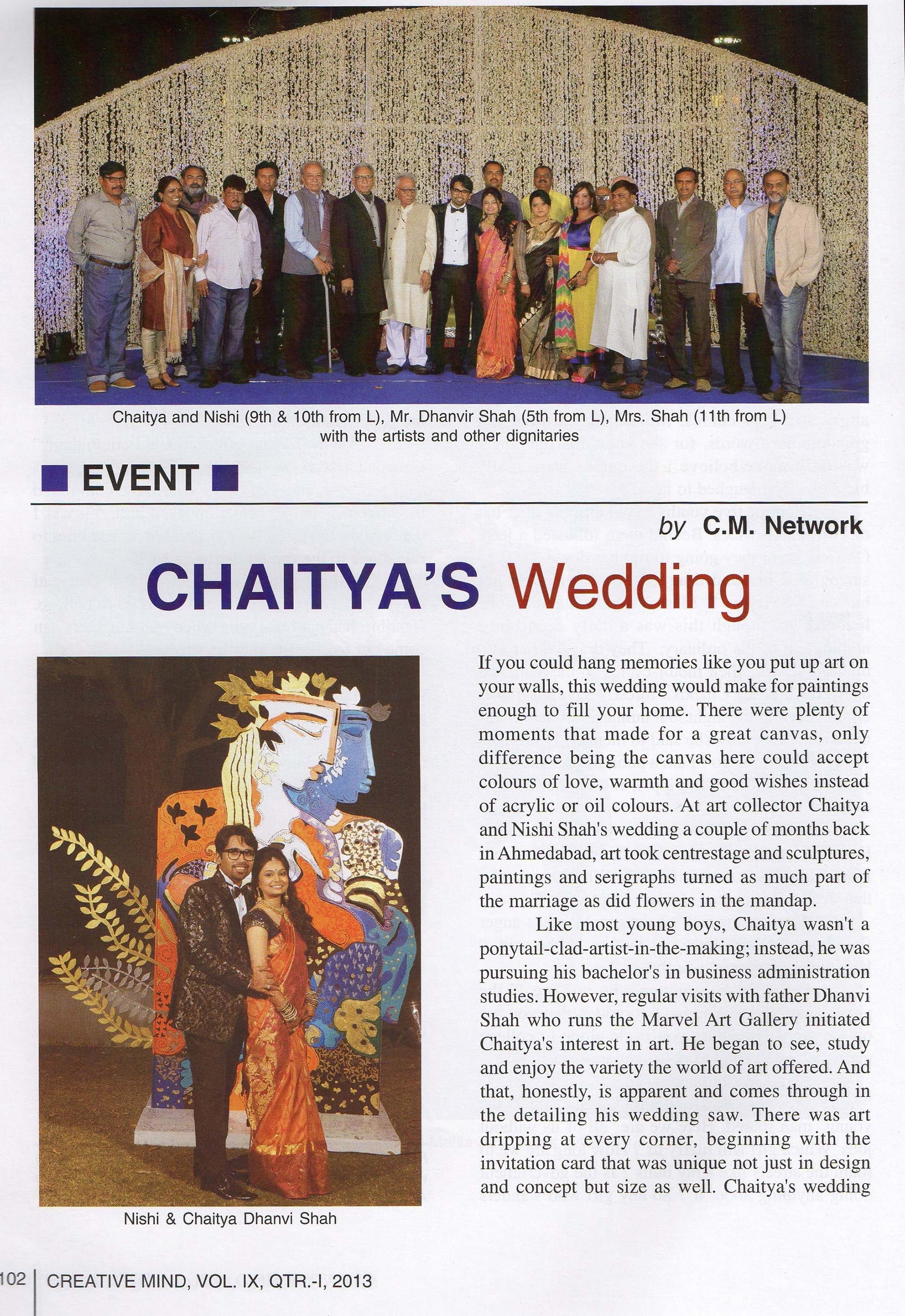 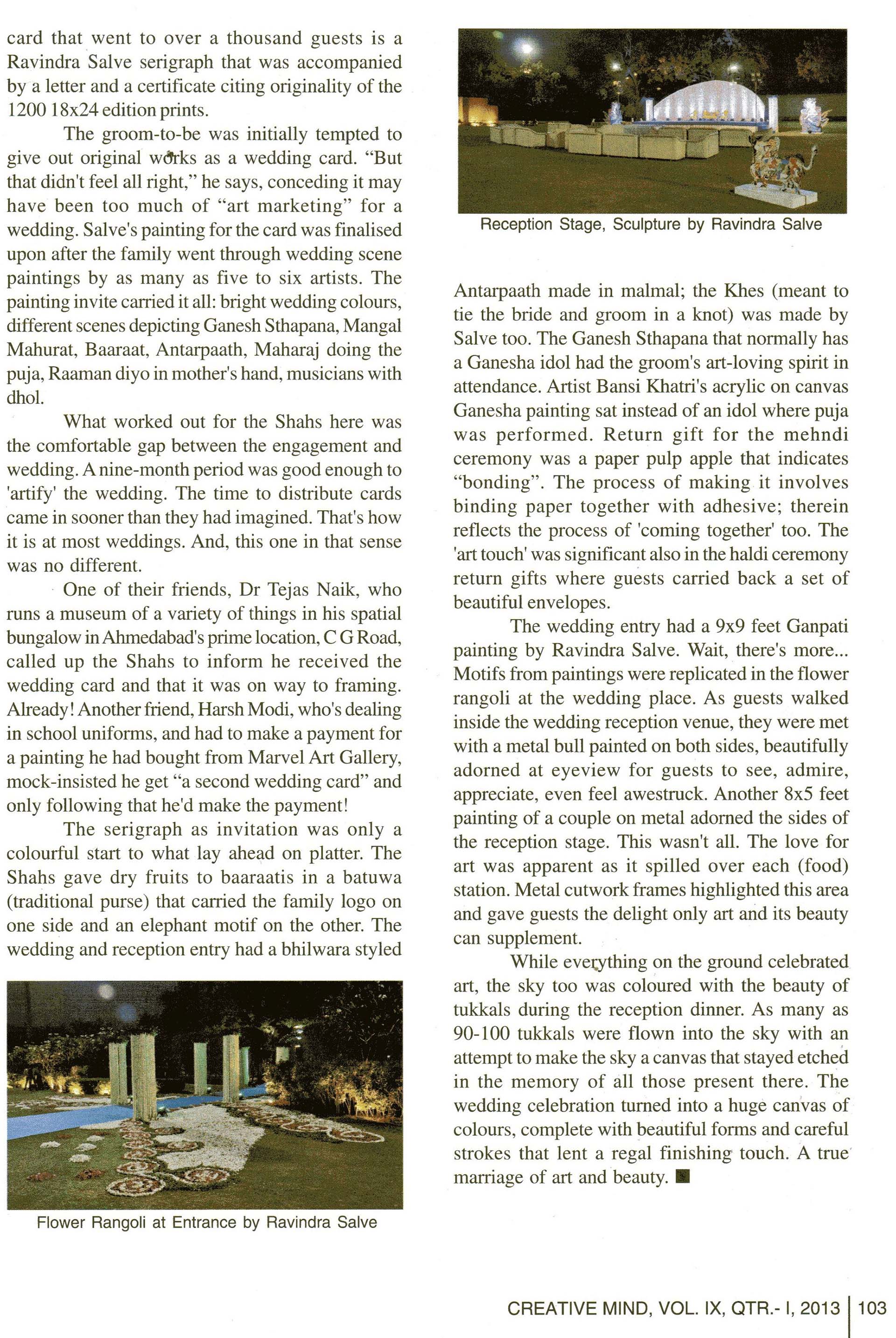 If you could hang memories like you put up art on your walls, this
wedding would make for painting enough to fill your home. There were
plenty of moments that made a great canvas, only difference being the
canvas here could accept colours of love, warmth and good wishes instead
of acrylic or oil colours. At arrt collector Chaitya and Nishi Shah’s wedding a
couple of months back in Ahmedabad, art took centrestage and sculptures,
paintings and serigraphs turned as much part of the marriage as did flowers
in the mandap.

Like most young boys, Chaitya wasn’t a ponytail-clad-artist-in-the-making;
instead, he was pursuing his bachelor’s in business administration studies.
However, regular visits with father Dhanvi Shah who runs Marvel Art Gallery
initiated Chaitya’s interest in art. He began to see, study and enjoy the variety
the world of art offered. And that, honestly, is apparent and comes through
in the detailing his wedding saw. There was art dripping at every corner, beginning
with the invitation card that was unique not just in design and concept but size
as well. Chaitya’s wedding card that went to over a thousand guests is a
Ravindra Salve serigraph that was accompained by a letter and a certificate
citing originality of the 1200 18×24 edition prints.

The groom-to-be was initially tempted to give out original works as a wedding
card. “But that didn’t feel all right'” he says, conceding it may have been too
much of “art marketing” for a wedding. Salve’s painting for the card was finalised
upon after the family went through wedding scene paintings by as
many as five ti six artists. The painting invite carried it all : bright wedding colours,
different scenes depicting Ganesh Sthapana, Mangal Puja, Raaman diyo in mother’s
hand, musicians with dhol.

What worked out for the Shahs here was the comfortable gap between the
engagement and wedding. A nine-month period was good enough to “artify”
the wedding. The time to distribute cards came in sooner than they had
imagined. That’s how it is at most weddings. And, this one in that sense was
no different.

One of their friends, Dr Tejas Naik, who runs a museum of a variety of things
in his spatial bunglow in Ahmedabad’s prime location, C G Road, called up
the Shahs to inform he received the wedding card and that it was on the way
to framing. Already! Another friend, Harsh Modi, who’s dealing in school uniforms,
and had to make a payment for a painting he had bought from
Marvel Art Gallery, mock-insisted he get ” a second wedding card” and only
following that he’d make the payment!

The seigraph as invitation was only a colourful start to what lay ahead on platter.
The Shahs gave drt fruits to baaraatis in a batuwa(traditional purse) that carried the
family logo on one side and an elephant motif on the other. The wedding
and reception entry had a bhilwara styled Antarpaath made in malmal; the Khes
(meant to tie the bride and groom in a knot) was made by Salve too. The
Ganesh Sthapana that normally has a Ganesha idol had the groom’s art-loving
spirit in attendance. Artist Bansi Khatri’s acrylic on canvas Ganesha painting sat
instead of an idol where puja was performed. Return gift for the mehendi ceremony
was a paper pulp apple that indicates “bonding”. The process of making it involves
binding paper together with adhesive; therein reflects the process of
‘coming together’ too. The ‘art touch’ was insignificant also in the haldi ceremony
return gifts where guests carried back a set of beautiful envelopes.

The wedding entry had a 9×9 feet Ganpati painting by Ravindra Salve. Wait,
there’s more….Motifs from paintings were replicated in the flower rangoli at the
wedding place. As guests walked inside the wedding reception venue, they
were met with a metal bull painted on the both sides, beautifully adorned at
eyeview for guests to see, admire, appreciate, even feel awestruck. Another 8×5 feet
painting of a couple on metal adorned the sides of reception stage.
This wasn’t all. The love for art was apparent as i spilled over each (food) station.
Metal cutwork frames highlighted this area and gave guests the delight only art and
its beauty can supplement.

While everything on the ground celebrated art, the sky too was coloured with
the beauty of tukkals during the reception dinner. As many as 90-100 tukkals
were flown into the sky with an attempt to make the sky a canvas that stayed etched
in the memory of all those present there. The wedding celebration
turned into a huge canvas of colours, complete with beautiful forms and careful
strokes that lent a regal finishing touch. A true marriage of art and beauty.