A tale of two cities

0
Revisiting Childhood through Art
06 August 2011
Next 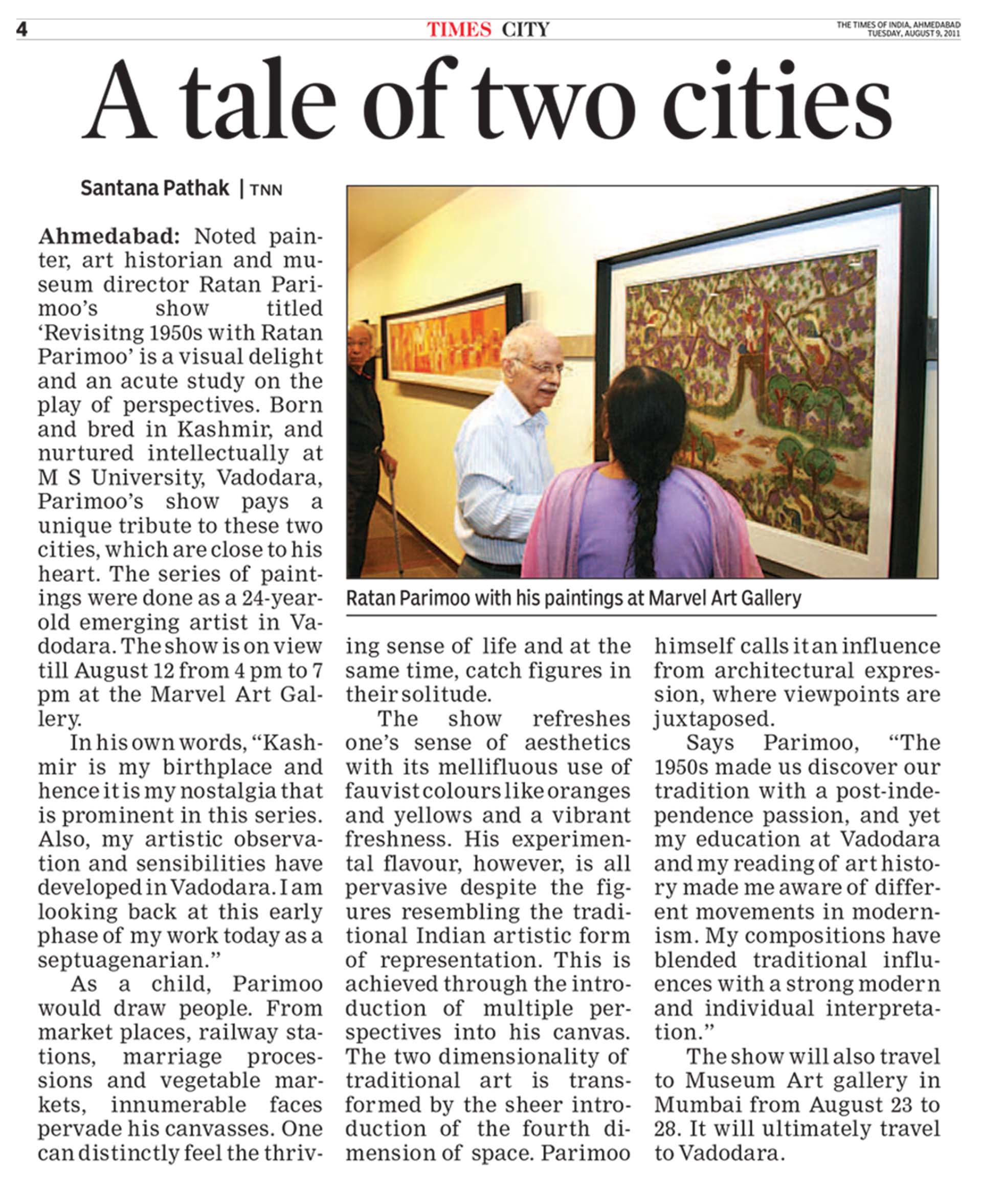 The Time of India

A tale of two cities

Ahmedabad: Noted painter, art historian and museum
director Ratan Parimoo’s show titled ‘Revisitng 1950s with Ratan
Parimoo’ is a visual delight and an acute study on the play of
perspectives. Born and bred in Kashmir, and nurtured intellectually
at M S University, Vadodara, Parimoo’s show pays a unique tribute
to these two cities, which are close to his heart. The series of
paintings were done as a 24-yearold emerging artist in Vadodara.
The show is on view till August 12 from 4 pm to 7 pm at the Marvel
Art Gallery.

In his own words, “Kashmir is my birthplace and hence it is my nostalgia
that is prominent in this series. Also, my artistic observation and sensibilities
have developed in Vadodara. I am looking back at this early phase of my
work today as a septuagenarian.”

As a child, Parimoo would draw people. From market places, railway stations,
marriage processions and vegetable markets, innumerable faces pervade his
canvasses. One can distinctly feel the thriving sense of life and at the same
time, catch figures in their solitude.

The show refreshes one’s sense of aesthetics with its mellifluous use of
fauvist colours like oranges and yellows and a vibrant freshness. His experimental
flavour, however, is all pervasive despite the figures resembling the traditional
Indian artistic form of representation. This is achieved through the introduction
of multiple perspectives into his canvas. The two dimensionality of traditional art
is transformed by the sheer introduction of the fourth dimension of space.
Parimoo himself calls it an influence from architectural expression, where
viewpoints are juxtaposed.

Says Parimoo, “The 1950s made us discover our tradition with a post-
independence passion, and yet my education at Vadodara and my reading of art
history made me aware of different movements in modernism. My compositions
have blended traditional influences with a strong modern and individual
interpretation.”

The show will also travel to Museum Art gallery in Mumbai from August 23 to 28. It
will ultimately travel to Vadodara.