The Swadeshi colour of canvas 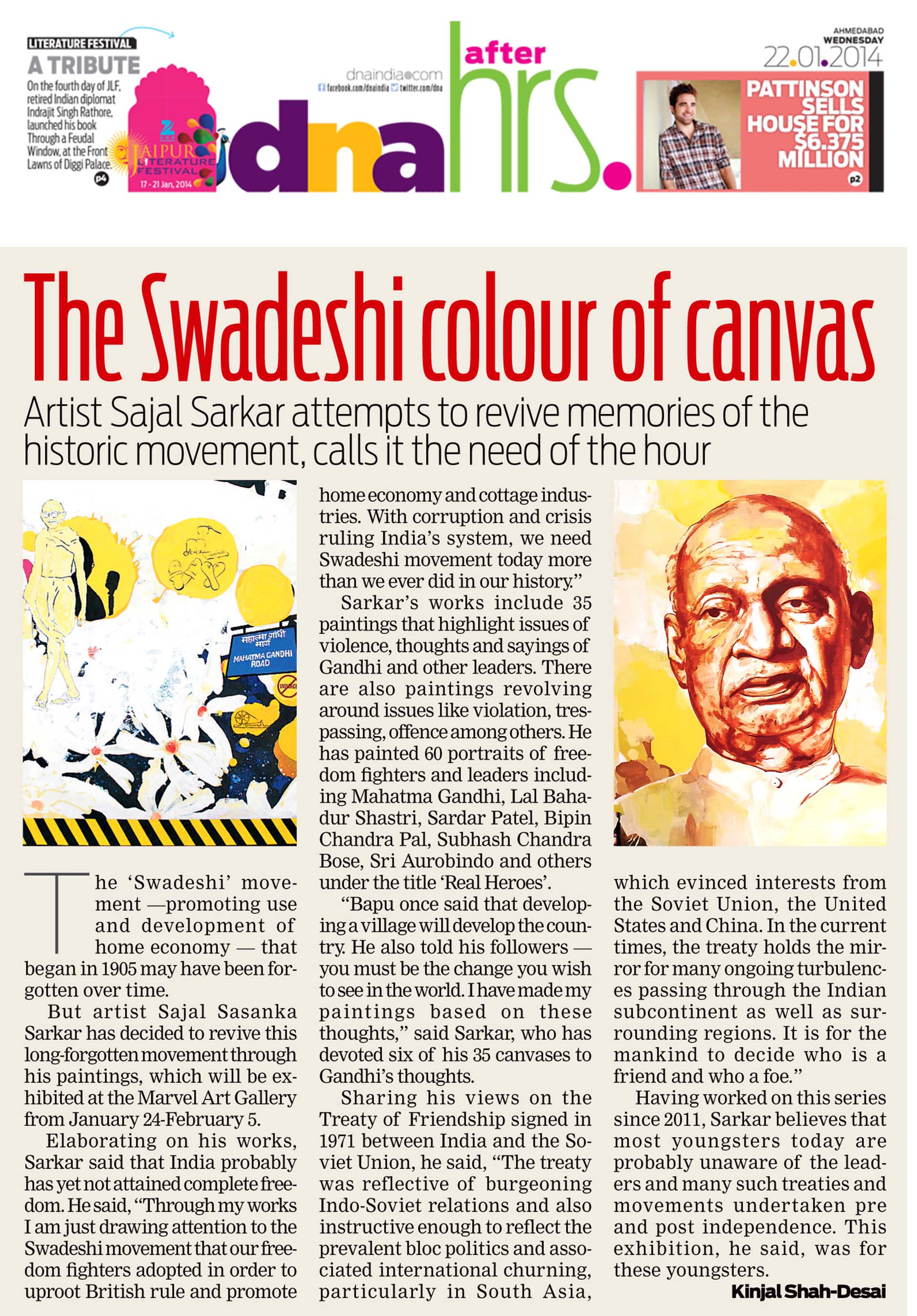 The Swadeshi colour of canvas

Artist Sajal Sarkar attempts to revive memories of the
historic movement, calls it the need of the hour

The ‘Swadeshi’ movement —promoting use and development of
home economy — that began in 1905 may have been forgotten
over time.

But artist Sajal Sasanka Sarkar has decided to revive this long-forgotten
movement through his paintings, which will be exhibited at the Marvel Art Gallery
from January 24-February 5.

Elaborating on his works, Sarkar said that India probably has yet not attained
complete freedom. He said, “Through my works I am just drawing attention to the
Swadeshi movement that our freedom fighters adopted in order to uproot British
rule and promote home economy and cottage industries. With corruption and crisis
ruling India’s system, we need Swadeshi movement today more than we ever did
in our history.”

Sarkar’s works include 35 paintings that highlight issues of violence, thoughts and
sayings of Gandhi and other leaders. There are also paintings revolving around issues
like violation, trespassing, offence among others. He has painted 60 portraits of freedom
fi ghters and leaders including Mahatma Gandhi, Lal Bahadur Shastri, Sardar Patel, Bipin
Chandra Pal, Subhash Chandra Bose, Sri Aurobindo and others under the title
‘Real Heroes’.

“Bapu once said that developing a village will develop the country. He also told his
followers — you must be the change you wish to see in the world. I have made my
paintings based on these thoughts,” said Sarkar, who has devoted six of his 35
canvases to Gandhi’s thoughts.

Sharing his views on the Treaty of Friendship signed in 1971 between India and the Soviet
Union, he said, “The treaty was reflective of burgeoning Indo-Soviet relations and also
instructive enough to refl ect the prevalent bloc politics and associated international churning,
particularly in South Asia, which evinced interests from the Soviet Union, the United States and
China. In the current times, the treaty holds the mirror for many ongoing turbulences passing
through the Indian subcontinent as well as surrounding regions. It is for the mankind to decide
who is a friend and who a foe.”

Having worked on this series since 2011, Sarkar believes that most youngsters today are
probably unaware of the leaders and many such treaties and movements undertaken pre
and post independence. This exhibition, he said, was for these youngsters.