Recreating the dynamics of the city 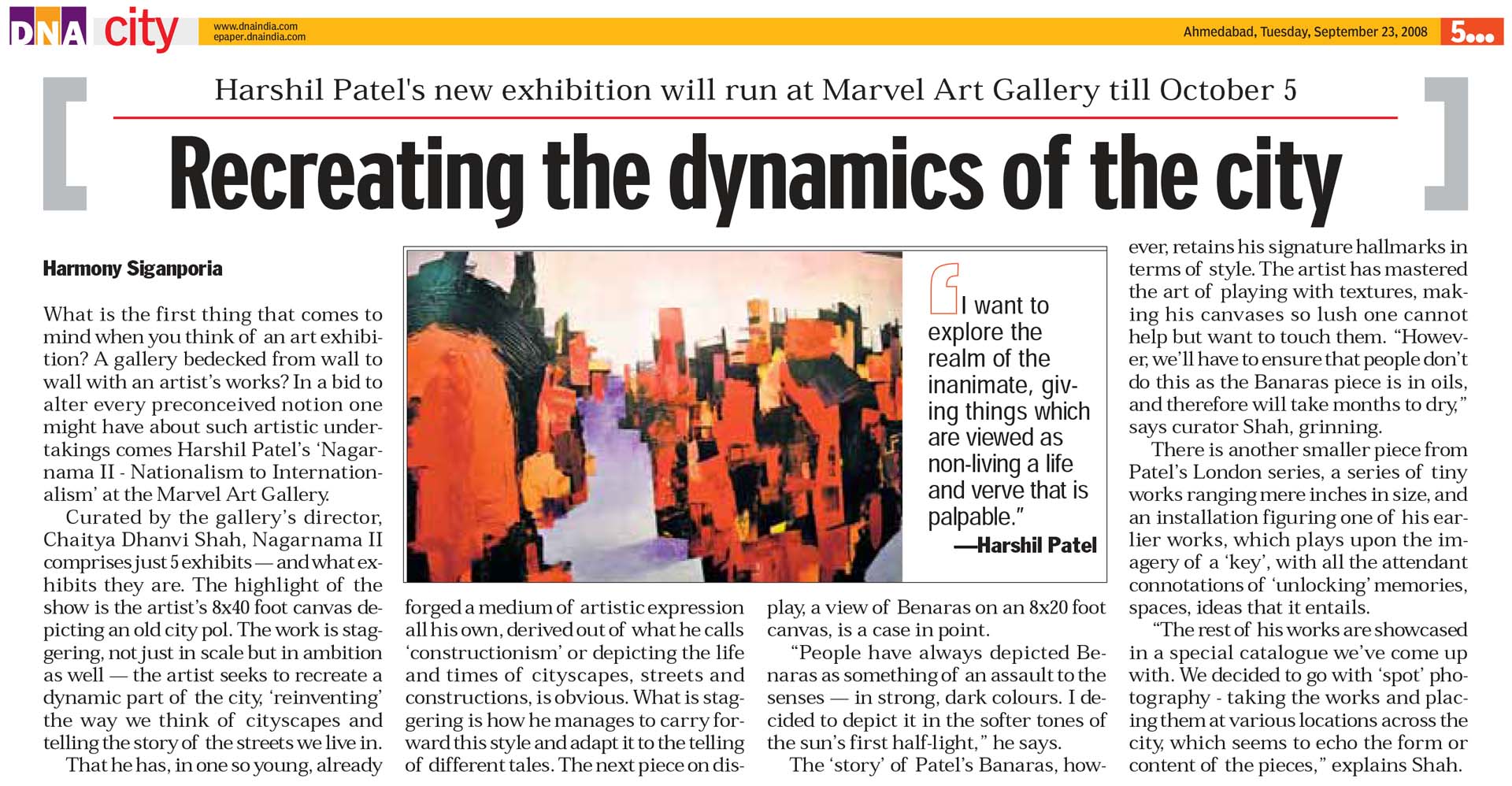 Recreating the dynamics of the city

What is the first thing that comes to mind when you think of
an art exhibition? A gallery bedecked from wall to wall with an
artist’s works? In a bid to alter every preconceived notion
one might have about such artistic undertakings comes Harshil
Patel’s ‘Nagarnama II – Nationalism to Internationalism’ at the
Marvel Art Gallery.

Curated by the gallery’s director, Chaitya Dhanvi Shah,
Nagarnama II comprises just 5 exhibits — and what exhibits
they are. The highlight of the show is the artist’s 8×40 foot
canvas depicting an old city pol. The work is staggering, not
just in scale but in ambition as well — the artist seeks to recreate
a dynamic part of the city, ‘reinventing’ the way we think of
cityscapes and telling the story of the streets we live in.

That he has, in one so young, already forged a medium of artistic
expression all his own, derived out of what he calls ‘constructionism’
or depicting the life and times of cityscapes, streets and constructions,
is obvious.What is staggering is how he manages to carry forward
this style and adapt it to the telling of different tales.The next piece on
display, a view of Benaras on an 8×20 foot canvas, is a case in point.

“People have always depicted Benaras as something of an assault to
the senses — in strong, dark colours. I decided to depict it in the softer
tones of the sun’s first half-light,” he says.

The ‘story’ of Patel’s Banaras, however, retains his signature hallmarks in
terms of style.The artist has mastered the art of playing with textures,
making his canvases so lush one cannot help but want to touch them.
“However, we’ll have to ensure that people don’t do this as the Banaras
piece is in oils, and therefore will take months to dry,” says curator Shah,
grinning.

There is another smaller piece from Patel’s London series, a series of tiny
works ranging mere inches in size, and an installation figuring one of his
earlier works, which plays upon the imagery of a ‘key’, with all the attendant
connotations of ‘unlocking’ memories,
spaces, ideas that it entails.

“The rest of his works are showcased in a special catalogue we’ve come up
with.We decided to go with ‘spot’ photography- taking the works and placing
them at various locations across the city, which seems to echo the form or
content of the pieces,” explains Shah.