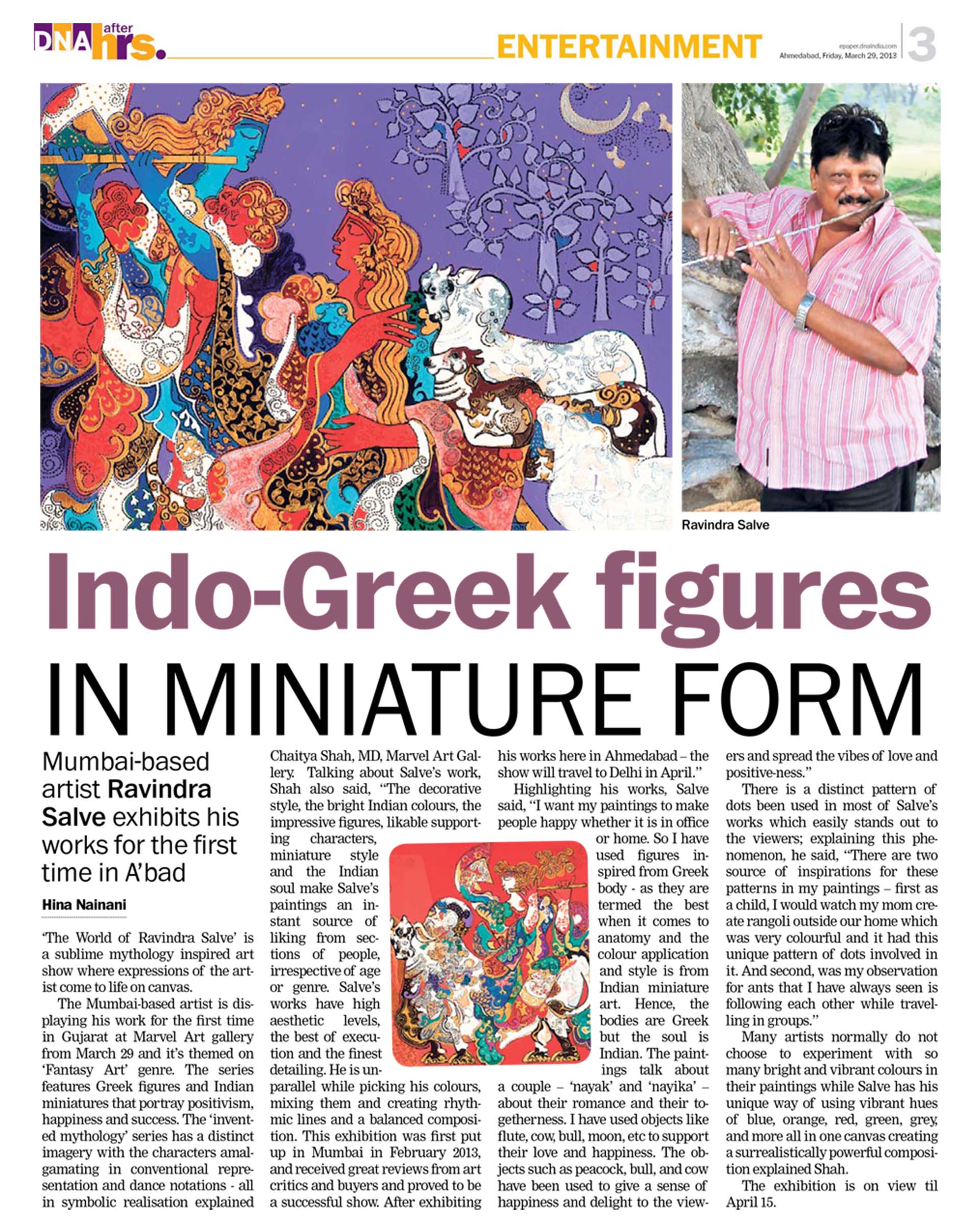 ‘The World of Ravindra Salve’
is a sublime mythology inspired
art show where expressions of
the artist come to life on canvas.

The Mumbai-based artist is
displaying his work for the first
time in Gujarat at Marvel Art gallery
from March 29 and it’s themed on
‘Fantasy Art’ genre. The series
features Greek figures and Indian
miniatures that portray positivism,
happiness and success. The ‘invented
mythology’ series has a distinct
imagery with the characters amalgamating
in conventional representation
and dance notations – all
in symbolic realisation explained
Chaitya Shah, MD, Marvel Art Gallery.
Talking about Salve’s work,
Shah also said, “The decorative
style, the bright Indian colours, the
impressive figures, likable supporting
characters, miniature style and the
Indian soul make Salve’s paintings an
instant source of liking from sections
of people, irrespective of age or genre.
Salve’s works have high aesthetic levels,
the best of execution and the finest
detailing. He is unparallel while picking
his colours,mixing them and creating
rhythmic lines and a balanced composition.
This exhibition was first put up in Mumbai
in February 2013, and received great
reviews from art critics and buyers and
proved to be a successful show. After
exhibiting his works here in Ahmedabad
– the show will travel to Delhi in April.”
Highlighting his works, Salve
said, “I want my paintings to make
people happy whether it is in office
or home. So I have used figures inspired
from Greek body – as they are termed
the best when it comes to anatomy and the
colour application and style is from
Indian miniature art. Hence, the bodies are
Greek but the soul is Indian. The paintings
talk about a couple – ‘nayak’ and ‘nayika’ –
about their romance and their togetherness.
I have used objects like
flute, cow, bull, moon, etc to support
their love and happiness. The objects
such as peacock, bull, and cow
have been used to give a sense of
happiness and delight to the viewers
and spread the vibes of love and positiveness.”

There is a distinct pattern of
dots been used in most of Salve’s
works which easily stands out to
the viewers; explaining this phenomenon,
he said, “There are two
source of inspirations for these
patterns in my paintings – first as
a child, I would watch my mom create
rangoli outside our home which
was very colourful and it had this
unique pattern of dots involved in
it. And second, was my observation
for ants that I have always seen is
following each other while travelling
in groups.”

Many artists normally do not
choose to experiment with so
many bright and vibrant colours in
their paintings while Salve has his
unique way of using vibrant hues
of blue, orange, red, green, grey,
and more all in one canvas creating
a surrealistically powerful composition
explained Shah.

The exhibition is on view til
April 15.