Husain is very much around- A tribute to M.F.Husain

0
Where drawing is representation of life
15 May 2011
Next 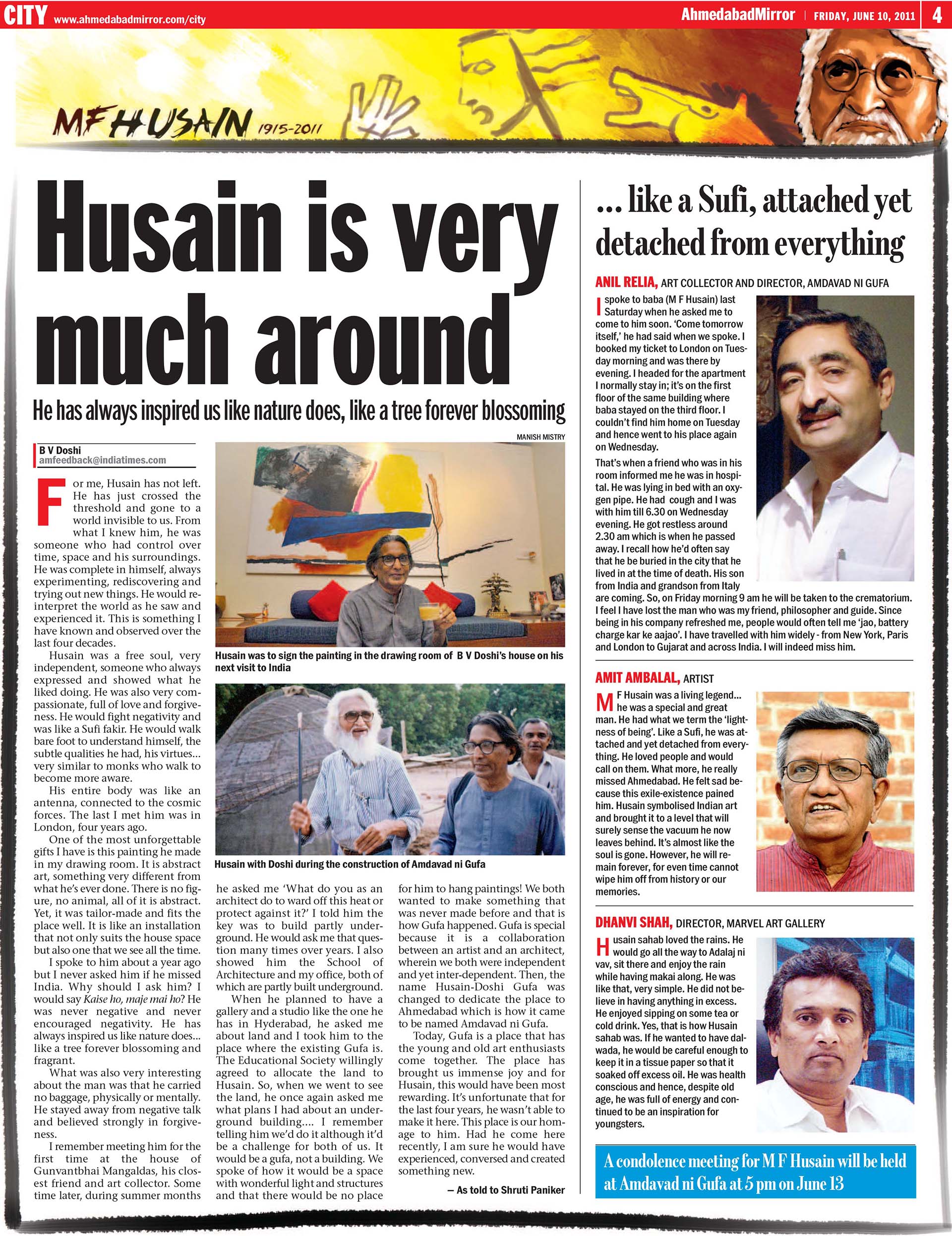 Husain is very much around

For me, Husain has not left. He has just crossed the threshold and gone
to a world invisible to us. From what I knew him, he was someone who had
control over time, space and his surroundings. He was complete in himself,
always experimenting, rediscovering and trying out new things. He would
reinterpret the world as he saw and experienced it. This is something I have
known and observed over the last four decades.

Husain was a free soul, very independent, someone who always expressed
and showed what he liked doing. He was also very compassionate, full of love
and forgiveness. He would fight negativity and was like a Sufi fakir. He would walk
bare foot to understand himself, the subtle qualities he had, his virtues… very
similar to monks who walk to become more aware.

His entire body was like an antenna, connected to the cosmic forces. The last
I met him was in London, four years ago.

One of the most unforgettable gifts I have is this painting he made
in my drawing room. It is abstract art, something very different from
what he’s ever done. There is no figure, no animal, all of it is abstract.
Yet, it was tailor-made and fits the place well. It is like an installation
that not only suits the house space but also one that we see all the time.

I spoke to him about a year ago but I never asked him if he missed
India. Why should I ask him? I would say Kaise ho, maje mai ho? He
was never negative and never encouraged negativity. He has
always inspired us like nature does… like a tree forever blossoming and
fragrant.

What was also very interesting about the man was that he carried
no baggage, physically or mentally. He stayed away from negative talk
and believed strongly in forgiveness.

I remember meeting him for the first time at the house of
Gunvantbhai Mangaldas, his closest friend and art collector. Some
time later, during summer months he asked me ‘What do you as an
architect do to ward off this heat or protect against it?’ I told him the
key was to build partly underground. He would ask me that question
many times over years. I also showed him the School of
Architecture and my office, both of which are partly built underground.

When he planned to have a gallery and a studio like the one he
has in Hyderabad, he asked me about land and I took him to the
place where the existing Gufa is. The Educational Society willingly
agreed to allocate the land to Husain. So, when we went to see
the land, he once again asked me what plans I had about an underground
building…. I remember telling him we’d do it although it’d
be a challenge for both of us. It would be a gufa, not a building. We
spoke of how it would be a space with wonderful light and structures
and that there would be no place for him to hang paintings! We both
wanted to make something that was never made before and that is
how Gufa happened. Gufa is special because it is a collaboration
between an artist and an architect, wherein we both were independent
and yet inter-dependent. Then, the name Husain-Doshi Gufa was
changed to dedicate the place to Ahmedabad which is how it came
to be named Amdavad ni Gufa.

Today, Gufa is a place that has the young and old art enthusiasts
come together. The place has brought us immense joy and for
Husain, this would have been most rewarding. It’s unfortunate that for
the last four years, he wasn’t able to make it here. This place is our homage
to him. Had he come here recently, I am sure he would have experienced,
conversed and created something new.

— As told to Shruti Paniker

DHANVI SHAH, DIRECTOR, MARVEL ART GALLERY
Husain sahab loved the rains. He would go all the way to Adalaj ni
vav, sit there and enjoy the rain while having makai along. He was
like that, very simple. He did not believe in having anything in excess.
He enjoyed sipping on some tea or cold drink. Yes, that is how Husain
sahab was. If he wanted to have dalwada, he would be careful enough to
keep it in a tissue paper so that it soaked off excess oil. He was health
conscious and hence, despite old age, he was full of energy and continued
to be an inspiration for youngsters.