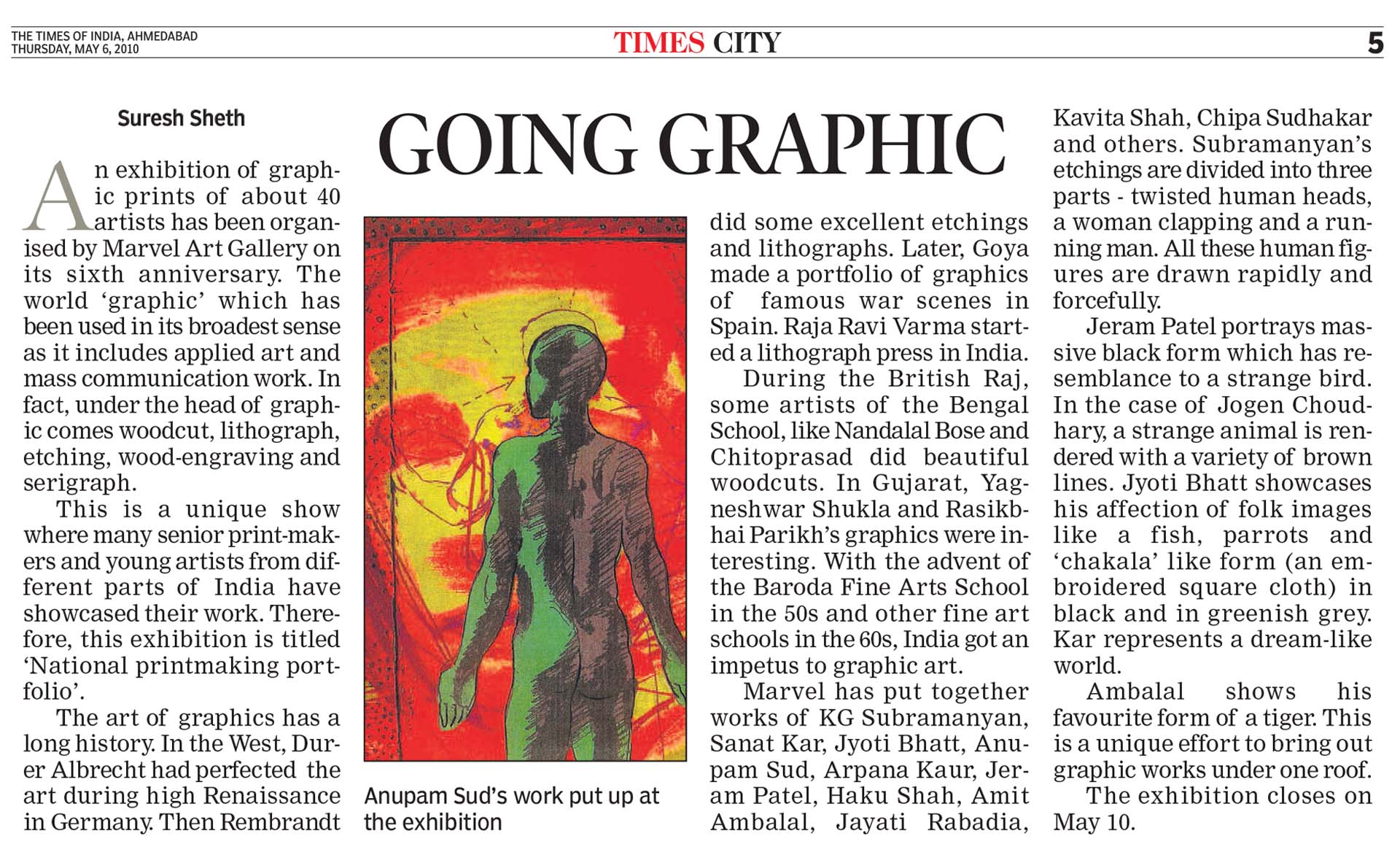 KG Subramanyan with Sanat Kar, Amit Ambalal, Kavita Shah and many other artists from across the nation.

The Times of India

An exhibition of graphic prints of about 40 artists has been
organised by Marvel Art Gallery on its sixth anniversary. The
world ‘graphic’ which has been used in its broadest sense as
it includes applied art and mass communication work. Infact,
under the head of graphic comes woodcut, lithograph, etching,
wood-engraving and serigraph.

This is a unique show where many senior print-makers and young
artists from different parts of India have showcased their work.
Therefore, this exhibition is titled ‘National printmaking portfolio’.

The art of graphics has a long history. In the West, Durer Albrecht
had perfected the art during high Renaissance in Germany. Then
Rembrandt Anupam Sud’s work put up at the exhibition did some
excellent etchings and lithographs. Later, Goya made a portfolio
of graphics of famous war scenes in Spain. Raja Ravi Varma started
a lithograph press in India.

During the British Raj, some artists of the Bengal School, like Nandalal
Bose and Chitoprasad did beautiful woodcuts. In Gujarat, Yagneshwar
Shukla and Rasikbhai Parikh’s graphics were interesting. With the advent
of the Baroda Fine Arts School in the 50s and other fine art schools in
the 60s, India got an impetus to graphic art.

Jeram Patel portrays massive black form which has resemblance to a strange
bird. In the case of Jogen Choudhary, a strange animal is rendered with a
variety of brown lines. Jyoti Bhatt showcases his affection of folk images
like a fish, parrots and ‘chakala’ like form (an embroidered square cloth) in black
and in greenish grey. Kar represents a dream-like world.

Ambalal shows his favourite form of a tiger. This is a unique effort to bring out
graphic works under one roof.

The exhibition closes on May 10.