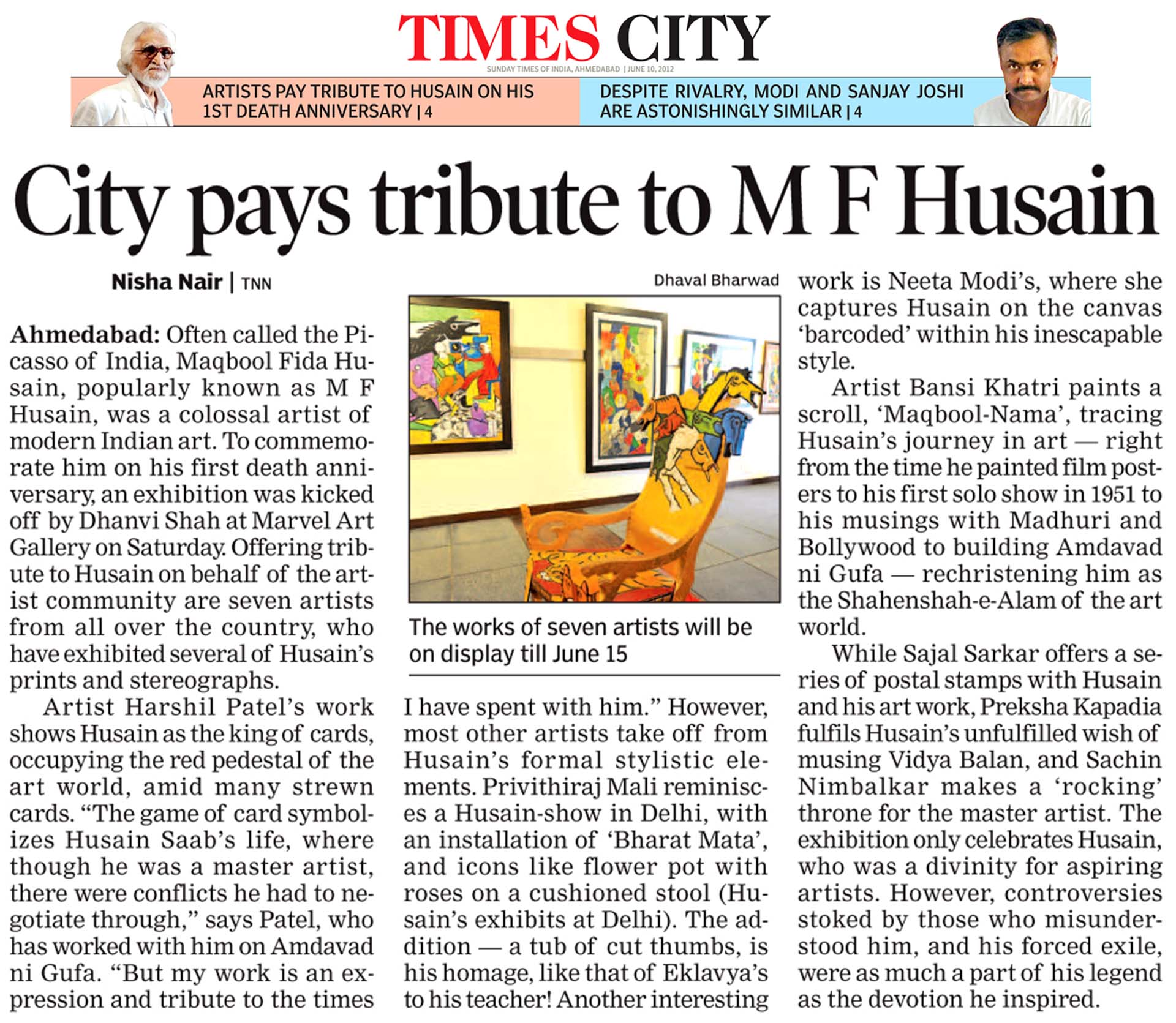 Ahmedabad: Often called the Picasso of India, Maqbool Fida Husain,
popularly known as M F Husain, was a colossal artist of modern Indian
art. Too commemorate him on first death anniversary, an exhibition was
kicked off by Dhanvi Shah at Marvel Art Gallery on Saturday. Offering
tribute to Husain on behalf of the artist community are seven artists from
all over the country, who have exhibited several of Husain’s prints and
stereographs.

Artist Harshil Patel’s work shows Husain as the King of cards, occupying
the red pedestal of the art world,amid many strewn cards. ” The game of
card symbolizes Husain Saab’s life, where though he was a master artist,
there were conflicts he had to negotiate through,”says Patel, who has
worked with him on Amdavad ni Gufa. “But my work is an expression and
tribute to the times I have spent with him.” However, most other artists take
off from Husain’s formal sylistic elements. Privithiraj Mali reminisces a Husain
show in Delhi, with an installation of ‘Bharat Mata’, and icons like flower pot
with roses on a cushioned stool (Husain’s exhibits at Delhi). The addition –
a tub of cut thumbs, is his homage, like that of Eklavya’s to his teacher!
Another interesting work is Neeta Modi’s, where she captures Husain
on the canvas ‘barcoded’ within his inescapable style.

Artist Bansi Khatri paints a scroll, ‘Maqbool-Nama’, tracing Husain’s journey
in art – right from the tome he painted film poster to his first solo show in 1951
to his musings with Madhuri and Bollywood to building Amdavad no Gufa
– rechristening him as the Shahenshah-e-Alam of the art world.

While Sajal Sarkar offers a series of postal stamps with Husain and his art
work, Preksha Kapadia fulfils Husain’s unfulfilled wish of musing Vidya Balan,
and Sachin Nimbalkar makes a ‘rocking’ throne for the master artist. The
exhibition only celebrates Husain, who was a divinity for aspiring artists.
However, controversies stoked by those who misunderstood him, and
his forced exile, were as much a part of his legend as the devotion he inspired.